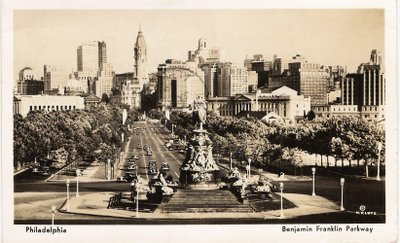 I’ve had a small stack of old postcards, of both Philadelphia and Portland, sitting my computer for at least two months, waiting to be scanned and blogged. I don’t remember where I picked these postcards up, but I have three of them, all scenes of Philly from the 1940’s, all written by “Grandmamma” to her grandchildren, Robert and Mignon, as they spent the summer at Simpson’s Num-Ti-Gah Lodge in Alberta, Canada. They were all written with a fountain pen that had to be dipped in ink every fourth word and mailed from Glenside, PA in late July, 1945.

I try to imagine what Grandmamma was like. Was she a traditional grandmother, one who baked, mended, gardened and put up the fruits of her garden for winter. Or was she ahead of her times, advising her teenage granddaughters about birth control and women’s rights? Did she believe in heaven and hell? How had the recent war treated her? Did she lose any children or grandchildren? Had she been born in the United States, or had she come here as a child? Did she love her husband? Did she learn her cursive in a K-8 red brick grammar school, or had she had the education a one-room school house offered. What year was she born?

I think about my own grandmother, who was a young, bewildered mother living in West Oak Lane when this postcard was written. She had just lost her six week old son Danny to a virulent strain of diarrhea that had swept the maternity ward of the hospital. Her grandmother was still living at the time, although her mother was not. She had yet to leave the country, her first trip to Europe didn’t come until the 1950’s. She did love her husband, and she yearned for more education (which she would get at night during her the years her kids were young).

My grandmother and the grandmamma who wrote this postcard were probably very different from one another. They did have one similarity, which was that they both knew the Philadelphia pictured on this card. One where street cars ran the streets, Wanamaker’s and Strawbridge’s still existed and there was no building in the city that was taller than City Hall.