A dear friend of mine got married today. I’ve known Akhri since I was about four years old. Her mom was my montessori school teacher, and because there are seven years between us, Akhri was enlisted to babysit for Raina and me one more than one occasion when we all lived in Eagle Rock. I have a vivid memory of her at 13 years old, standing in our kitchen, making macaroni and cheese.

Akhri and Brian have been together for more than seven years, and two weeks ago decided to get married and have a party. Last I heard, they had been considering a common law marriage, until they discovered that Oregon doesn’t actually have those. My mom called me in the middle of my workday, just before I headed to Portland for the holidays, to tell me that not only would I be home for Christmas, Hanukkah and my dad’s birthday dinner, I would also be home for Akhri’s wedding reception.

It was half potluck, half catered, with enough to feed twice the number of people who were there. The food was Middle Eastern themed, and we brought a big bowl of roasted veggies and a large green salad. The hall of the Portland Subud house was decorated in shifts by many loving hands. My mom and I stopped over there this afternoon to add our white fairy lights and a several candlesticks. When we arrived, we weren’t the only ones doing helping get ready. A friend was in the kitchen baking the chocolate wedding cake.

I arrived tonight with my parents and sister at 6:30 to kids running between rooms, people carrying food from the kitchen to the hall, and a space that was transformed by candlelight and joy. Akhri was alight with happiness, and when I got a moment to talk to her, she told me about her wedding service that was held earlier in the day in the chambers of a Multnomah County Judge. How she was moved to tears by the words of the ceremony, as simple as it was. 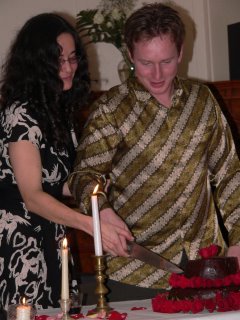 It wasn’t a formal night. There was one toast, cutting of the cake and a brief kiss, before they evening was turned over to talking and music. Cory, an old friend, did a little fiddling. My dad ran home for two guitars, so that he and my sister could jam for a bit with Cory. Akhri’s two year old niece stole the show with her dancing. At the end, everyone chipped in to do dishes and put the hall to rights. 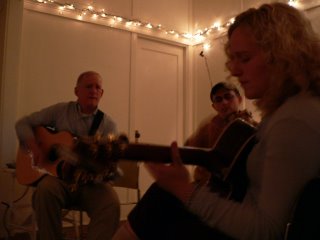 It was a wonderful way to bring my visit to a close.