Back in July, Scott and I bought the studio apartment next door to us. It has been nothing short of life changing. I’ve now lived in this apartment for nearly 19 years (wrap your brain around that one), and there’s never been a moment when I did not fantasize about expanding into the unit through my dining room wall. The fact that it has actually happened still amazes me.

Those of you who have been reading here for a while (which is probably most of you, I don’t think anyone just stumbles across this site these days), you might remember that when my grandfather Phil bought this apartment back in 1965, the purchase actually included the second unit that we now own (Apt. 2023).

He died shortly before they moved in, and in a fit of panic, my grandmother sold off that portion of the apartment (for $800), leaving herself with a two bedroom, one bath. Everyone immediately regretted that choice (grief driven decisions are rarely good ones), but the apartment next door never came up for sale at a time when my grandmother was in a place to buy it.

It took us about six weeks after making the purchase to have a door installed connecting the two units. But back in September, we took the boys to the Jersey Shore for a week and while we were away, a very nice contractor named Tom cut a hole and put in a very nice, simple door.

It’s the first time in my adult life that I’ve had a second bathroom, which continues to be an absolute pleasure. Other joys that this expansion have brought include a second small kitchen, complete with an additional fridge, and the ability to move Scott’s office into the new space, freeing up the room that was once his for the boys.

That said, there have been some bumps in the road. There’s so much I want to do to make the new space more functional for us, and I have so little time and energy to make it happen (because of the pandemic, we don’t have any childcare help anymore, and so I don’t have a whole lot of bandwidth for anything extra these days).

And so, while it’s amazing to have more space, it’s also because a bit of a dumping ground, where we tuck anything that the boys might destroy. When they do breach the perimeter and make their way into the annex (as we have been calling it), we have to tail them closely to ensure that they don’t pull down a camera or help themselves to a drawer full of knives.

But there is time for all that. We will eventually put up shelves and get things tucked away. Perhaps someday, we’ll even find the funds to break down more of the wall and build a larger, more functional kitchen out of the two we now have. I will keep dreaming it so. 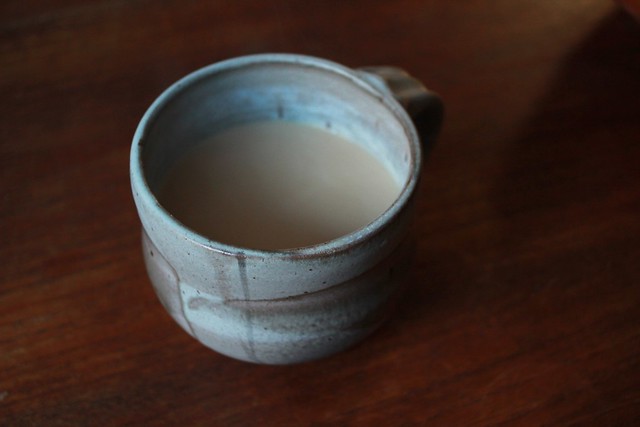 It is brutally cold outside. According to my phone, it is currently 18°F and it will drop down to 16°F before the day is done. I ventured out earlier today to meet a friend and pick up a few groceries wearing my second heaviest coat (the very heaviest one is hard wear while walking) and have no intention of setting foot outside again today.

I am drinking hot, milky tea, have put on a heavy, army green wool sweater that has been with me since college, and have even turned the heat on for a little while (the heat that drifts in from our hallways is often enough to keep the apartment comfortable).

I feel intensely grateful for the tea, the sweater, the heat, and while we’re at it, the cozy home. May we all be so lucky.