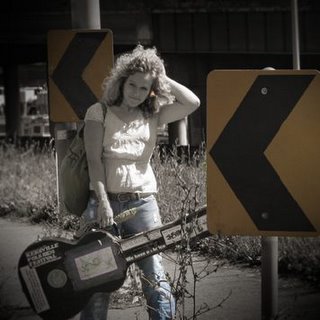 My sister did the first show of her tour last night, and my sources say that it went very well. She made $15 in tips and sold two CDs, which in my mind is an auspicious start to the tour. She is now down in LA at a folk music conference and had a funny thing happen to her today. She was standing in the hotel where the conference is taking place, and an older, slightly letchy guy, seeing the star tattoo she has on her chest came up to her and said, “So, did the tattoo artist pay you to do that?” She used one of the many skills our mother taught us, how to play dumb, and said, “No, it doesn’t work that way.” His increasingly smarmy reply was, “Well, I’m going to tell your father about that.” No longer playing dumb, but genuinely confused she said, “Do you know my father?” He looked at her like she was a little slow and said that he didn’t. But Raina pressed on and said, “Maybe you do you know my father” and gave our dad’s name.

Turns out, this guy, who came up to my sister to hit on her, knows our dad. He had worked with some of the same musicians my dad used to work with. Bet he feels a little silly.