Sammy and Declan have recently started making up small, silly stories, and I am loving every moment of it. A couple of days ago, I was changing Declan’s diaper and Sammy hopped into Declan’s crib.

Then Declan said, ” Once upon a time, a little boy appeared in my crib.”

They told their three line story over and over again, giggling all the while.

Parenting is hard and takes you to the brink of your sanity, but it also has some really satisfying moments.

A few days ago, this little emblem fell off the cabinet where it has been affixed for the last 56 years. It was a feature of the kitchen that would often catch my eye and I would always think to myself, “who’s lifetime are we talking about? I’d prefer that it not be mine”

Just a few days before the fixative failed, Scott and I had been talking about the possibility of replacing the kitchen. Now that we have the added space of the efficiency next door, we’d like to move our laundry over there. That could easily kick off a much needed redo (the kitchen still functions, but there’s so much that is screaming to be replaced).

But now I wonder if the kitchen is listening and has gained sentience. Is it communicating with us, pleading not to be replaced? Or is it simply ready for retirement?

I think about writing in this space every day. Sometimes, it’s just a whisper of a thought that passes so fast that I barely notice it happening. Other times, it’s a more insistent urge. Lately, the desire to be writing about my mundane life has been building into a tsunami of need. I can either yield and let the wave wash over me or I can drown in it. And so, here I am.

In part, it’s the isolation. We’re wrapping up the second full year of the pandemic. My days are full of the work necessary to keep two toddlers clean, dressed, fed, and entertained. It’s occupying work, but doesn’t do much in the way of giving me connection with people outside my household. And writing on the internet has always given me a sense of connection (even if hardly anyone drops by anymore).

The other thing that’s propelling me back towards this space is the fact that I just hit my 20 year anniversary in Philadelphia. I don’t remember the exact date I moved back in January 2002 (it’s probably buried somewhere in the archives of this site), but it was mid-month. I can’t quite believe how much of my life I’ve spent in this city (and in this apartment).

When I moved here, I was 22 years old. I followed a quiet nudge from my inner voice that Philadelphia was the place I needed to be. I came with a couple of suitcases and an expectation that I’d be here for three years. But then my grandmother died. I inherited the apartment. I made friends. I started writing. I met Scott. I went to grad school. And on, and on, and on.

I am not at all dissatisfied with my life, but it is decidedly different from what I imagined for myself when I was younger. I wonder what the next 20 years will hold. And will I still be here, in apartment 2024?

The last six months have passed faster than any other phase of my life. These days, I spend most of my time shepherding these two through naps, feedings, diaper changes, and playtime.

I have known from the very beginning that this was going to be my only trip through parenthood. Armed with that understanding, I spend a lot of my time with these babes trying to be conscious and present. To notice the joy and goodness of it.

And there is so much pleasure to be had in these boys. They are really happy little people who are almost always ready to giggle or snuggle. I can’t wait to see who they become.

Scott and I spent a week and a half in Ireland last month. We toured historic sites, drove narrow roads on the left side, and ate a huge number of potatoes. In one memorable meal, I ordered a potato-topped seafood pie and was served both mashed and roasted potatoes alongside the dish containing the pie.

Despite the fact that I love them dearly, potatoes are not one of the vegetables I often cook at home. Scott is often eating a low carb diet, which means that potatoes are outlawed. When he is eating a more extensive array of foods, I realize that I associate potatoes with an unhealthy diet and so eliminate them from my shopping trips.

However, they are delicious. And filling. And versatile. And they don’t necessarily have to keep company with sour cream, butter, and cheese (though god knows, that makes them infinitely more appealing).

I was in college when I had the best baked potato of my life. My parents were in town for the weekend visiting me and we drove from Walla Walla to a little town maybe 45 minutes north (the name currently escapes me). After wandering through the town, we ended up in a local bar for lunch. My mom was skeptical, but the only other restaurant was full and we were hungry.

In the end, it was one of the better meals of my life. All the food was homemade, and then there was that magical baked potato. It had a crisp exterior, but was entirely tender on the inside. It was topped with sautéed onions, peppers, mushrooms, spinach, garlic, and shredded cheddar cheese.

I’ve made versions of it many times in the years since, but it’s never quite as good as it was that autumn day with my parents. 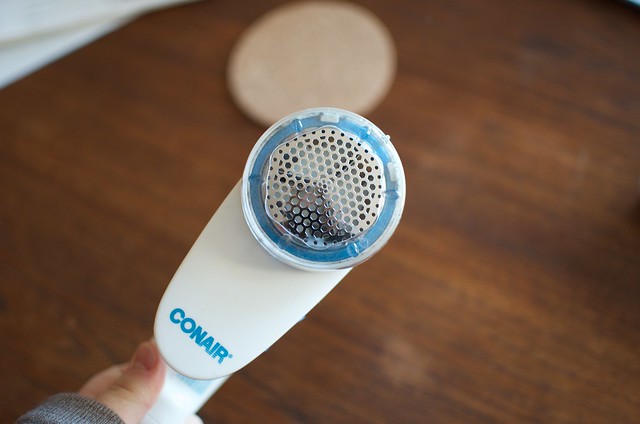 There is currently a seasonal capsule wardrobe movement afoot. All across the internet, bloggers are editing their clothes down to just 25 or 30 pieces and then sharing all the different outfits they can create with the pared down selection. It’s an exercise designed to create freedom through limitations and remind one that more isn’t always better.

I applaud those who are able to winnow down to two or three dozen items. In all honesty, I probably don’t wear much more than that on a regular basis, but there’s something about creating restrictions where none are necessary that makes me chafe. And so, this blog post isn’t about my decision to pare down. It is, however, about one small thing that I gleaned from all this capsule wardrobe reading I’ve been doing.

In a nutshell, one thing people are discussing is that an inevitable result of narrowing your available items of clothing is that more pressure is put on the garments that remain in rotation. The pieces you are wearing will need extra care. But that’s okay, because in the end you’ve still got less to tend for. That means there’s time for things like hand washing, overnight airing, and fuzz removal. 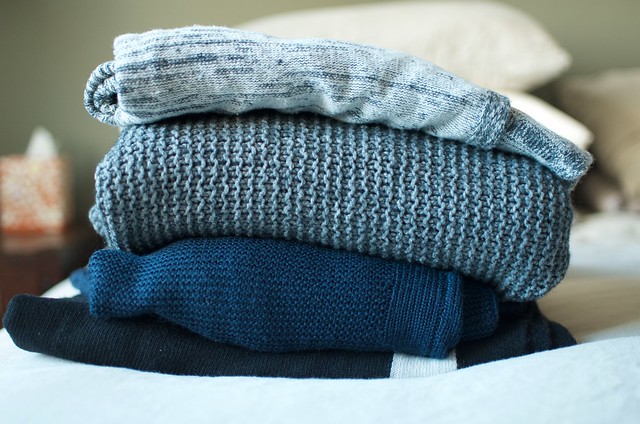 Now, like I said before, I’m not trying to do a capsule wardrobe. But the idea of spending just a little bit more time taking care of the things I have struck me. And so, I’ve been making a point of hand washing some sweaters that were long overdue. I’ve done a bit of mending (a pair of socks with a year old hole took three minutes to repair). And I’ve mercilessly tackled all the pills and fuzzies that dot my knits and woolens.

To that end, I bought myself a brand new fuzz shaver. I had a travel sized one years ago, but it was of limited utility. This new one is like a race car in comparison (though the fuzz collection space could be bigger). I’ve been shaving fuzz from everything within reach.

I groomed a beloved sweater I’ve had since college and it looks much revived. A new thrift store find got the treatment and now looks like it’s straight off the rack. And this morning, I didn’t let Scott leave for work until I ran my little fuzz shaver over the pills dotting the cotton zip-up he was wearing (it’s surprisingly effective on occupied items).

It’s the little things that please me most.

In my family, dialect and language have always been a big topic of conversation. My sister and I were raised on the west coast (Los Angeles and Portland) by parents that had grown up primarily on the east coast (my dad lived in Hawaii for five years, but otherwise spent his youth in Northern Virginia, Philadelphia, and Boston).

When Raina and I were young, one of our favorite leisure time activities was asking our mom to pronounce certain words and then laughing uproariously when her “orange” sounded so much different from our “orange.” Though she never had a painfully strong Philadelphia accent, traces of that city remain in her voice to this day.

I moved to Philly nearly 12 years ago and have slowly lost some of my perfect west coast pronunciation and vernacular (we always get our comeuppance). My vowels have lengthened and I have to consciously work to keep the worst of the nasal tones out of my voice. The way I say the word “horrible” has forever changed and I’m afraid I will always call a sandwich made on a long roll a hoagie.

And so, when the New York Times published a regional dialect quiz, I was curious where it put me. Would my west coast roots reign, or would my current location call the shots? I answered as honestly as I could and was surprised when my map came out as distinctly Pacific Northwest (I’m ignoring the fact that it seems to think that I also talk like someone from Reno. I’ve never even been there beyond an airport stop).

My mom took the quiz and we all were amused to find that despite her 43 years in California and Oregon, she still talks like someone from the Philadelphia region. The dialect of your birth is darn hard to shake.

Come one, come call, to the Carnival of the Mundane. There’s room for everyone no need to shove. We have stories of cannibalistic pets and post-modern absurdity. Of elevator etiquette and transcendence via fire hydrant. So please, stay awhile. Take a walk around and see the sights.

Kim lets her kids fingerpaint for the first time and the experience rapidly degrades.

Erika and her sister mourn the passing of a planet.

Ellen narrows down the field for her fantasy future husband.

Randall’s son gets the bargain of the century on some hamsters and their habitat.

Kevin breaks up with Tom from Myspace.

Sparky eats his way around Philadelphia.

Kailani ponders the ways in which she has come to realize that blogging is taking over her life as well as offering an object lesson on elevator etiquette.

Eteraz ruminates on the wonder that is President Bush reading Camus.

Mad Kane’s trials and tribulations while tagging along on her husband’s business trip.
A fire hydrant brings peace and the appreciation of the little things to Lil’ Duck Duck.

Me-Ander explores the last days of summer with an extra week of vacation and spends some time with her grandchildren.

Consumer culture gives Wenchypoo indigestion so she tries to impart a little frugal wisdom onto the Gen Y-ers in the audience.

Just in time for back to school, the American Inventor Spot features a slew of supplies that are far cooler than anything I ever had in my back pack or dorm room as well as a taste-test of the best cheap sodas.

Alex at Have Passport, Will Travel determines that it is time for a new dog to come into his family’s life.

Miriam’s Ideas are many, including ways to get other people to pump her gas.