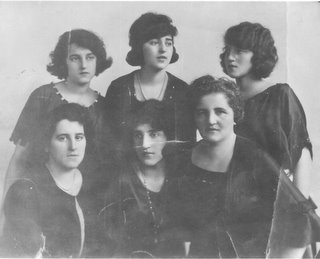 Yesterday was the 33rd anniversary of the Supreme Court decision on Roe verses Wade, which granted all women in this country the right to a safe abortion. Thirty-three is not a notable anniversary for any reason other than this right is on shaky ground, as the makeup of the Supreme Court shifts and our country grows more fearful at the hands of the Bush administration.

Here in Philadelphia, in 1925, my great-grandmother Elizabeth, died from the complications of an illegal abortion. She was 32 years old and had three children, ages 10 (my grandmother, Della), 12 (Doris) and 14 (Milt). Her beloved first husband had died from during the 1918 flu epidemic. She was newly married to a man younger than herself, of whom her family did not approve, when she discovered she was pregnant for the fourth time.

No one who is still living knows the details of her death. I imagine that she was nervous but also hopeful, as she walked through the city to the abortionist who would take her life. I don’t know if she went alone, or if one of her four sisters went with her. I do know that she had plans for the future and that she intended to live. She wanted to raise her children to adulthood, to make a life a with her new husband, and to run her Russian tea room. Instead she died, leaving a cluster of orphans where a family once stood.

For years, the cause of Elizabeth’s death was a family secret. People were told she died of an infection, or of a case of strep. I remember as a small child imagining that she had cut her finger while cooking for the restaurant, and that the resulting infection had been what killed her. I know my cousin Melissa spent her first twenty years being terrified every time she would get strep throat, thinking she was going to die, just like her great-grandmother.

When my sister was an baby, my mother came back to Philly for a couple of weeks to help her aunt move into a new apartment, and spend some time with the rest of the family. It was during this time that my great-great Aunt Sue, the sole remaining sister of the five, was feeling chatty and confided in her how Elizabeth had died. As I got older, I came to know the story of the abortion, and assumed that others in the family did as well. I mentioned it in passing to a cousin five or six years ago, and her reaction was one of shock. Once she assimilated the news, it made the family puzzle a little clearer. After that, news spread quickly, and the myth of Elizabeth’s unknown infection dissolved into the tapestry of our family history.

I like to think that had Elizabeth been able to obtain a safe, legal abortion, she would have lived a long life, seasoned with a healthy mix of joy and pain. There will always been women who need, for a variety of reasons, access to abortion. I hope that they will always be safe and legal.

*Elizabeth is the one in the bottom, left corner.

14 thoughts on “A family secret”