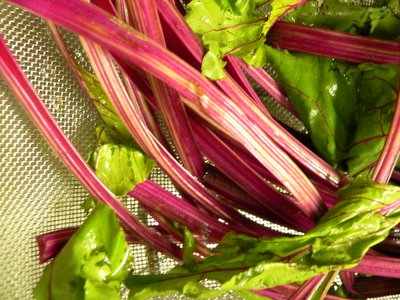 When my mother was pregnant with me, she craved borscht (Russian beet soup). She would buy the jars of the ready-made Manichewitz soup on the “ethnic” foods aisle and drink it at room temperature, straight out of the bottle. In a more superstitious time, the village bubbes might have been concerned that the baby inside her would come out tinted purple, from all the beets she consumed while I was sharing her body. Luck for me, I came out the normal color, but with a healthy love for beets.

For many years, my father would grow beets in his garden (he may still, but I haven’t been around much lately to partake in the bounty of the garden. It’s one of the things I miss most about Portland). They would be ready to be pulled in the late summer or early fall, when the rest of the garden had started to go to seed. The deep green tops and rhubarb-like stalks would get roughly chopped and steamed with the dark red roots, and sprinkled with a puckery vinegar/olive oil dressing, garlic and salt. That taste, of tangy red wine vinegar with earth-y, fresh, shockingly magenta chunks of slippery beet, makes me see the backyard of my parents’ last house in summer, with the rusty, once-white outdoor table sitting in the middle of the patio, covered in pots and garden implements.

The first time I met my ex-boyfriend’s mother, she served beets, complete with the greens. I took a helping of the beets, but avoided the greens. I don’t know why I did it, normally I like the greens, but that day wasn’t in the mood for them. She noticed this, and pounced, asking why I hadn’t taken the greens along with the roots, and gave me a lecture on the nutritional importance of the greens. I stood my ground, and said I didn’t care for them (I was too far in to cave and just eat a bite). It made me feel slightly uncomfortable, as if I had committed a major error in eating judgment. I always wondered if she remembered, and if she had thought, when her son and I broke up, that it was a good thing, because really, what was her son doing with a girl who didn’t eat her beet greens!

A couple years ago, a friend of mine was dealing with some food allergies, and hit a point where winter roots vegetables were all her body could tolerate. She ate a lot of beets that winter (along with carrots, parsnips, rutabagas and sweet potatoes). She was the first one to introduce me pureed beet soup, totally unlike the borscht of my childhood. It was simple, beets cooked in a little chicken broth, with some onion thrown in for added sweetness. She would do batches with both red and golden beets and then pour them into bowls from pitchers, swirling designs into the bowls. A hunk of spelt bread from a local bakery on the side and we felt like we were eating something special.

Tonight I felt a change in the air as I walked home, a slight touch of spring. It made me crave salad, but not one that was completely summery. I ran into my local produce market and grabbed a head of butter lettuce, grape tomatoes, red onion, cucumber, a couple of lemons and a bunch of beets. The beets gave the springy salad a winter tie in, as if to tell my palate that it could start looking forward to spring, but don’t get too excited yet. I went home and popped the beets into a pot of water, just cutting off the ends but not peeling them. A couple of years ago, I learned from a friend that if you cook them with the skins on, and then run them under water after they are cooked, you can slide the skins right off. If I don’t roast them, I always cook them like that (it’s fun to rub the skins away and have them come up to clean and perfect with so little effort). I cut up one of the smaller beets and ate it tumbled into my salad. The greens I sauteed separately with a little red onion and then combined them with the rest of the beets, to take to a potluck tomorrow night. I hope everyone else likes beets as much as I do.