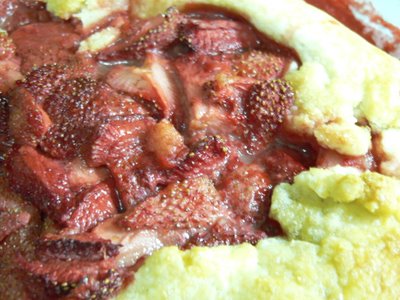 Yesterday evening, I walked into my local produce market, looking for something yummy. I’ve come to the conclusion recently that things like grapes, strawberries and avocados make my quality of life infinitely better. I had, for so long, rationed these items, citing in my head their high prices as reason enough to stay away. Of course, I rarely hesitate to drop $10 or $15 or $20 on a meal when I’m out with my friends, so it has started to seem silly to tell myself that $3.50 on a bag of grapes is too high a price (I’m also trying to cut back on the eating out, because it IS too expensive, and it stopped feeling like something special. I don’t ever want meals that people prepare for me to loss their gift-like quality, even if I am paying them for the experience).

I entered Lin’s Produce with strawberries on the brain, as I envisioned kicking off an hour or two on the couch with a gluttonous berry binge. I was excited to see several boxes of strawberries on sale, two quarts for the price of one. Granted, the berries were a little smaller than their full-price brethren, but their color was deep and I’m a sucker for a bargain.

I got them home, quickly rinsed the contents of the clamshell plastic container under the faucet and tumbled them into a bowl. I bit into the first one as I took a step towards the couch, and immediately turned back. The strawberry in my mouth was mealy and decidedly past it’s prime. I stuck the bowl in the fridge and settled for some grapes instead. But the question of what to do with the sad strawberries sat heavy in my mind. They weren’t good for eating, but I had a feeling they’d could redeem themselves if I cooked them.

I tossed those berries around my brain during the morning and by the end of the work day, I had developed a baking itch that needed to be scratched. I spent twenty minutes this afternoon reading muffin recipes on epicurious.com, but that wasn’t quite right. As I walked home, I called my mom and asked her what to do with the berries (hoping that she’d suggest some sort of baked thing I hadn’t thought of). She suggested cooking them gently with a little sugar and water, kind of a strawberry compote. Was there any rhubarb available, she asked?

Tossing the mail and my bag on the bar as I entered my apartment, I sat down on the floor in front of the living room bookshelf, to browse for inspiration. I envisioned a rustic fruit tart, one that was freely formed, with half the fruit still poking out of the top. Unfazed by the fact that I was unable to find a recipe that described such a thing made with strawberries, I pressed on.

I made a standard pie crust (For some reason, tonight was the first time in my entire life that the phrase “rub the butter into the flour” made sense to me), rolled it out and managed to center it on top of a circle of parchment paper, on top of a pizza pan. Into the middle of it, I plopped all the strawberries, which I had cut into quarters and tossed with some lemon zest, juice and sugar. The liquid immediately began to run all over the place and I hurriedly patched and folded the crust, until it resembled the thing in my head. I painted the turned up swathes of dough with an egg wash (I have learned a few things while watching the food network) and sprinkled the whole thing with turbinado sugar. I put it into the oven at 350 degrees, set a timer for 40 minutes and went to the library.

When I got home, I sniffed the air and thought to myself, “well, nothing smells like it’s burning” and checked the oven. There was a lot of bubbling juice in the parchment paper, many of the strawberries had donated their color to the liquid, keeping none for themselves, and the crust was nearing a respectable brown. I pulled the thing out and marveled at the amount of juice it had produced. There is a reason why rational people make use pie plates and tart pans. I am not one of them. Despite it’s juicy shortcomings, it was tasted incredible. When my roommate came home, he headed into the kitchen and said, “what’s that?” in a tone of voice typically reserved for appreciating good looking women or Indian food.

It was a moderately successful baking experiment for the girl who rarely bakes (because she hates to measure). Next time, I think I’d toss just a tiny bit of cornstarch into the strawberries, to give the liquid a way to build upon itself.

Unfortunately, after all the baking and library excitement, I was overtaken by sleepiness while reading on the couch around 7:30 and drifted off into a nap, missing a chance to go to the movies with friends. I guess I just can’t have it all in one night.

6 thoughts on “A rustic tart and an inadvertent nap”