My dad turns 57 on January 2nd, but since I’ll be back in Philly by then, we are celebrating tonight. It will be a little party, just some family and close friends. We’re having teriyaki beef stroganoff, steamed broccoli and pinch pie.

One of the traditions in my family, initiated by my grandma Bunny (dad’s mom), is that the birthday boy or girl gets to pick their birthday dinner. No request goes unfulfilled, which is why while I was growing up we had sushi (uncle Bill) as well as hot dogs and corn on the cob (me at age 6). While the main courses run the gamut, the dessert is almost always the same. Because if you’re smart, you ask for pinch pie.

Pinch pie isn’t really a pie at all. It is a big meringue shell, that you fill with vanilla ice cream, whipped cream and strawberries. Some time during the 80’s, one of my dad’s brothers came up with the idea to sprinkle toasted slivered almonds on top, an addition we’ve kept, because it’s just so darn good. 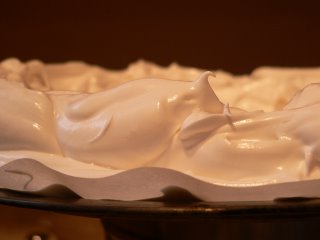 Bunny first made pinch pie in the 40’s, as a special Valentine’s Day dessert for her husband. It was a recipe she cut out of a lady’s magazine, although she was never the lady’s magazine type. She made the shell in the shape of a heart, and picked the white and red fillings to compliment the holiday. I imagine her, standing in the kitchen of her farmhouse in Virginia, apron wrapped about her waist, her feet in old canvas sneakers, whipping both air and love into that bowl of egg whites as she kept one eye on her boys.

When my family moved to Portland, we were no longer within birthday dinner range of Bunny’s big house in Woodland Hills, CA. I would call her on birthdays, to have her talk me through the recipe for pinch pie, one more time. Each time we talked, I wrote down the instructions, but I still liked to call, for the connection and the encouragement. Bunny died when I was 14, so I can’t call her for tips anymore. But I think of her, as I stand at the counter in my parents’ kitchen, the 5 by 7 recipe card with my 11 year old handwriting in front me for reference, whipping love into egg whites.

Beat the 6 egg whites with the cream of tartar on the lowest speed the mixer has, until they start to foam up. You beat them on low, because you don’t want to break the long, thin strands of proteins in the egg whites. They help the mixture get stiff, and you are going to sculpt a bowl out of this stuff, you want it as stiff as possible.

Slowly add the sugar, in about four parts and keep blending.

When you are almost finished, add the vanilla. You know that you are done beating the eggs when it looks glossy, and it stands up in sticky peaks when you remove the beaters.

These days I make it on a sheet of parchment paper, laid on a pizza pan, but the original recipe calls for a buttered platter (a buttered cookie sheet also works. Do not spread this out on tin foil, it is impossible to remove). Take half the mixture and plop it out in the middle of the pan and spread it out to make the floor. Then start building the walls around the edges, sculpting them thick and as tall as you can make them.

Put it in a 225 degree oven for about an hour (you aren’t really baking it so much as drying it out). When it’s done, put it up someplace high, because people like to break little pieces of it off before it’s time for dessert.

Fill it with ice cream (it doesn’t have to be vanilla, but if it is, make sure you get the kind with the little flecks of bean in it). Top it with fresh whipped cream, lightly sweetened. Sprinkle the toasted almond slivers on top, and serve with a bowl of strawberries on the side. We always use the sweetened, frozen ones, because they have lots of juice.

I have one warning. This dessert may make you want to lick your bowl when you have finished scraping up everything you spoon can get to. In my family, while you weren’t allowed to lick your bowl at the table, no one blinked if you took it into the kitchen to get those final drops of strawberry, ice cream and meringue. Yum.