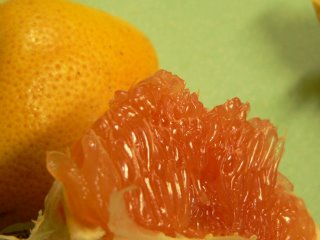 I have never been one of those people who believes that grapefruit can only be eaten with a spoon, cut in two at the equator and sprinkled with sugar. I don’t have the time or patience for this kind of operation. I much prefer to consume it like a messy orange, leaning over the sink, oblivious to the drips running down my left cheek and the pith under my fingernails until the fruit is just a tasty, tart memory.

I peel it the way my mom taught me, cutting off the northern and southern most tips and then scoring the peel so it is divided into quadrants. The four pieces of skin come off easily after that. She learned this technique in Mrs. Downey’s (mandatory for all girls in 1959) home economics class in 7th grade. It was the only skill that stuck.

When I was in college, the dining hall would put out pale grapefruit halves in the morning along side the unripe melon and cottage cheese in the salad bar. They were saran-wrapped into bowls, a maraschino cherry stuck into the center. I have no memory of ever eating them.

My parents spent a year and a half in Chicago in the late 70’s, managing to live through two of the coldest winters the windy city had had in the last 100 years. When the temperature reached 19 below with a wind chill of 79 below, my mom declared that there had to be better places to raise children. I was born the next year in Los Angeles. Throughout those winters, she ate grapefruit everyday, craving anything that would help her remember places where layers of down and wool were not necessary for survival. She ate those grapefruit like oranges too, getting strange looks from the other teachers at the Montessori school where she was doing her student teaching.

I’ve always wondered who decided that grapefruit was to be eaten cut into halves, with a spoon. Who declared that it was only appropriate for morning meals? I encourage you all to reclaim this unsung member of the citrus family along with me. Peel them, break them into segments and enjoy.